In 1939 inspired by Jung’s Bollingen Tower, Christiana Morgan with Henry Murray built a tower on a bluff above a tidal river in Massachusetts. As a personal and artistic retreat, it was also where they nurtured their 40 year relationship and worked on creating an example of a supreme romantic love. Here Morgan would transform many of her dreams and visions from her analysis with Jung into elaborate wood carvings, paintings, and stained-glass windows. The tower became a physical embodiment of the creative consciousness of her life and her journey into the depth of her psyche. Through archival footage and recently discovered family photos her granddaughter weaves a tapestry of Morgan’s life and the significance of the Tower. 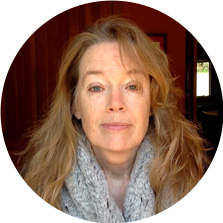 Hilary Morgan is a filmmaker and the granddaughter of Christiana Morgan. She worked for 20 years as a documentary cinematographer, which took her on assignments all over the world. In more recent years she has returned to making personal documentaries. Having years before discovered that she shared with her grandmother a fascination with dreams and visions, she decided to make a film about her grandmother’s life, work, and art. Hilary lives with her family on the coast south of San Francisco.