This course will be on group supervision in combination with some techniques of psychodrama. The techniques are designed to make conscious the analyst’s implicit knowledge of the client by allowing the client to gain a symbolic embodied presence (use of empty chair etc.). Depending on the time, one or two or more colleagues will present vignettes of cases, if possible with focus on transference and counter-transference. Depending on the number of participants there will be an inner circle (about 12 participants and an outer circle (number unlimited). 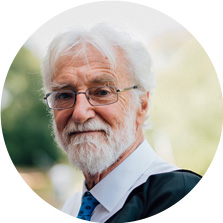 John Hill was born in Dublin 1943. He received his degrees in philosophy at the University of Dublin (B.A.) and the Catholic University of America (M.A.). He became a training analyst of the C.G. Jung Institute in 1981 and was a member of the admissions committee for twenty years. He participated in the founding of a new training institute under the jurisdiction of AGAP in 2004. He is a lecturer, training, and supervising analyst, previously at the C.G. Jung Institute, and currently at the International School of Analytical Psychology, Zürich (ISAP). He was chairman of Jungian Odyssey 2005-06, then academic director until 2012. He has played various roles in theatrical performances on Jungian themes. Currently in private practice in Zürich.